100 Years of the Faculty of Medicine

The Ljubljana Faculty of Medicine through the years

The first scientific steps in the field of medicine in the territory of modern-day Slovenia were taken by the medical section of the Academia Operosorum Labacensium, founded in 1693, whose most visible representative was Marko Gerbec (1658–1718), one of the most important doctors in Slovenian history. 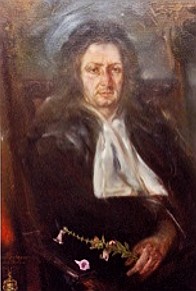 A school of midwifery was founded in 1753, marking the establishment of a medical school in Ljubljana; two of the teachers were Fran Klopstein, who organised refresher courses for surgeons, and Balthasar Hacquet (1739–1815), who brought important research in the natural sciences, along with medical progress, to Slovenian territory. In 1780, master of anatomy, surgery and obstetrics Anton Makovic (1750–1803) began teaching at the school in the Slovenian language. In 1782 medico-surgical studies were added to the study of philosophy and theology at the lyceum (licej) in Ljubljana and Klagenfurt, making this institution the forerunner of Slovenia’s first medical faculty. Surgeons and physicians were trained there, and the most renowned lecturers were Balthasar Hacquet (1739–1815), who taught botany, chemistry, anatomy, surgery and obstetrics, and Vincenc Kern (1760–1829), lecturer in anatomy, obstetrics and surgery, who left for the medical faculty in Vienna in 1805 to become a surgical instructor. During the time of the Illyrian Provinces (1809–1813), the licej became the Ecole centrale, which had seven departments; the medical department was a university-level institution and was organised in a similar way to medical faculties in France. Study there took five years to complete. The curriculum for the medical and surgical streams was the same for the first three years; thereafter, for the last two years, medicine focused on pathology and clinical studies, while students of surgery were given more practical instruction in anatomy, surgery, obstetrics and forensic medicine. 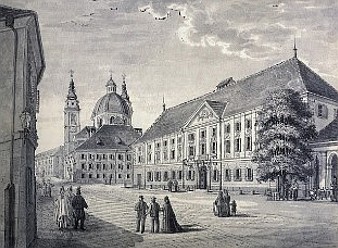 The lyceum building (right) on Vodnikov trg, Ljubljana, where medico-surgical studies were introduced in 1782*

The end of Napoleon’s Illyria in 1813 also marked the end of the first forerunner of the Ljubljana medical faculty, although the school began to teach surgical medicine again after the restoration of the Austrian monarchy. During this period, the medical profession in Slovenia gradually began to realise that a medical faculty would have to be established sooner rather than later. The course of study slowly began to change and, after the academic reforms of 1833, the groundwork was laid for the transformation of the school into a faculty; however, this did not prevent the authorities from closing the Ljubljana school during the politically turbulent year of 1848. Only Ljubljana’s medical licej was closed, with the equivalent institutions in Graz, Salzburg and Innsbruck remaining open and becoming faculties. The Slovenian medical profession did not repeat its demand for a faculty of medicine until the end of the First World War.

In 1918, following the collapse of the Austro-Hungarian Empire, the university committee in Ljubljana established a special medical faculty sub-committee comprising Dr Lojz Kraigher (1877–1959), Dr Ivan Oražen (1869–1921) and Dr Alojz Zalokar (1887–1944). They drafted a report recommending that teaching commence in the autumn of 1919, announcing preparations for teaching in subsequent years and containing a plan for the organisation of faculty institutions and a draft curriculum. The Faculty of Medicine was established in Ljubljana following the adoption of the Ljubljana university law at the Belgrade assembly and its publication in the Uradni list Kraljevine SHS, the official government gazette of the Kingdom of Serbs, Croats and Slovenes, on 23 August 1919. However, to the disappointment of a great many, the faculty was to offer only two-year courses. The first 66 students began their courses in November 1919, and Professor Alfred Šerko (1879–1938) was appointed to serve as dean. By 1938, a total of 543 students had passed their initial exams in Ljubljana; after that, they would go on to study in Zagreb, Belgrade or abroad, particularly Prague. The curriculum followed that of the faculty in Zagreb, which had been established in 1917. Until 1939 the piecemeal faculty, and all its institutes, was housed in a new building designed by architect Ivan Vurnik on Zaloška 4 and completed in 1921.

The difficult staffing and spatial conditions brought teachers and students together in constant efforts to establish a fully-fledged medical faculty. In 1940 the government in Belgrade finally allowed the faculty to add fifth and sixth semesters to its course of study. Three more subjects were added to the programme: pathology, surgery and internal medicine. However, having acquired additional premises, it then languished somewhat during the Second World War: although lectures continued, as did academic exercises, more and more teachers, assistants and students began to get involved in Liberation Front activities. Teaching finally came to a halt in 1943. Immediately after the war, and following a government decree issued on 31 July 1945, a full faculty of medicine, offering a ten-semester course, was established in Ljubljana. The faculty took over the running of healthcare institutions in the area covered by Ljubljana General Hospital and in the hospital’s vicinity, and placed the clinics and institutes in those institutions. The solid trust and relentless will of the faculty members employed at that time enabled the faculty to rise from almost nothing within a matter of months, and lectures and exercises began in the winter semester of the 1945/46 academic year for students of all years. At that time, the faculty had 27 teachers and 566 students, including 302 first-year students (165 male, 137 female) embarking on what was to be a ten-semester course. A Stomatology Clinic was established at the new Faculty of Medicine and became the centre for the teaching of oral medicine. The faculty grew quickly in the first post-war years and, following its integration into the health ministry and its takeover of Ljubljana hospital, became responsible for all hospital-based treatment.      ​​​​

Left: Entrance to the Šentpeter Barracks on Vrazov trg 1, leading to the dean’s building, occupied from 1945*
Right: First generation of students and teachers at the Faculty of Medicine in Ljubljana, 1952*

The years between 1949 and 1954, when the faculty was separated from the university, were a special period in its history. It became an independent institution, the College of Medicine (MVŠ), with all the responsibilities that the university had had up to that point on its behalf. This move probably reduced the amount of time it took to establish the Faculty of Stomatology. Alongside Professor Jože Rant, who began to lecture in orthodontics as well as oral medicine, the faculty employed a number of other lecturers and assistant lecturers. In 1954 the pressure on space that oral medicine had been experiencing came to an end when the Faculty of Stomatology moved into the new Stomatology Clinic building. The number of students enrolled in the faculty rose to a height of 817 in the 1950/51 academic year, with 32 teachers working there at the time. In 1952 the clinics were removed from the responsibility of the MVŠ, acquiring healthcare institute status, and the universities law of 1954 abolished the MVŠ. The Faculty of General Medicine and Stomatology, with two departments, then became part of the university once again. In 1963 the titles of Doctor of Medicine and Doctor of Oral Medicine, awarded to faculty graduates, were replaced with the titles of Doctor and Dentist respectively, although intense lobbying by the Slovenian Medical Society led to the old titles being reinstated in 1986. 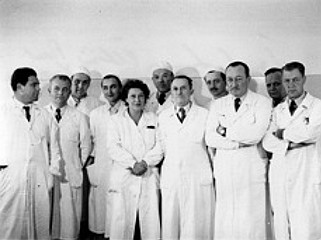 First teachers of oral medicine in Ljubljana in the 1950s*

The period after 1960 saw the most rapid growth in the Faculty of Medicine’s history. By 1961 it comprised 17 institutes, 19 departments and three independent institutions. The faculty’s main task was to strengthen its staffing and material foundations, and to ensure that the health service had a sufficient number of doctors, particularly general practitioners and dentists, as there was a lack of both across Slovenia. The curriculum changed in response to medical developments taking place at home and worldwide, with the number of subjects doubling between 1945 and 1960. General Yugoslav standards for medical faculty studies were adopted in 1965. In line with these standards, the faculty moved to consolidate the conditions of study, increase teaching efficiency and draft new curriculums; it was also faced with the task of resolving issues relating to lack of space. Exercises took place across numerous groups, often into the late evening, while the huge advances being made in medical knowledge throughout the world necessitated the further expansion of the syllabus, the teaching of new specialists, the opening-up of new positions and requirements for additional premises. The construction of pre-clinical institutes was therefore unavoidable. Strong support for their establishment was voiced by faculty and faculty students, as well as by the Slovenian Medical Society, at that time headed by Professor Anton Dolenc (1930–2013). Preparations for the construction of the first building began in 1973, with the first occupants arriving some 14 years later. The new faculty building, designed by architect Vladimir Ažman, was installed as part of a general medical campus or complex, with the sensible aim of connecting it with Ljubljana University Medical Centre and the clinical teaching going on within it.

During the 1989/90 academic year, the faculty introduced a six-year medicine and oral medicine programme in which subjects were studied in ‘blocks’. With the exception of the period between 1952 and 1957, when a six-year programme had been introduced, the study programme had always taken place over five years. Pre-clinical syllabuses did not change significantly. The number of teaching hours gradually increased. The previous programme comprised 4,725 hours (an average of 945 hours per academic year), but this rose to 5,190 hours in 1994 and to 5,500 hours in 1999. In 2009/10 the faculty overhauled its Medicine and Dental Medicine programmes, transforming them into Second-Cycle Integrated Master’s Courses. Both courses last for 12 semesters over six years (360 credits), with the Medicine course comprising 45 compulsory subjects and the Dental Medicine course comprising 57 compulsory subjects.

Throughout its 100-year history, the Ljubljana Faculty of Medicine has shown itself to be a robust institution whose teaching and research excellence has had, and continues to have, significant impact. It has trained over 8,000 doctors and around 2,000 dentists to work in Slovenia and to treat patients, give preventive and curative healthcare to the whole population, provide expert advice at general and specialist clinics, regional and clinical hospitals, health resorts and rehabilitation centres, and perform every kind of healthcare-related service at the primary, secondary or tertiary level – all in the Slovenian language. The Faculty of Medicine has also ensured, through the provision of postgraduate study, that it has its own Doctors of Science carrying out scientific research work in numerous preclinical and clinical fields; it also habilitates its own university teachers and assistants.

When faced with spatial, material and staff-related pressures, the faculty has always sought the best path forward for the education and training of new doctors and dentists. Patient satisfaction with their work is the highest accolade this institution can achieve.