Dr Ivan Oražen and his contribution to the Faculty of Medicine

The life and work of Slovenian doctor and politician Ivan Oražen (1869–1921) was closely linked to the period in which he lived. An illegitimate child who suffered poverty throughout his younger years, he later found wealth by marrying into the Auer brewing family. This did not, however, prevent him from remaining true to his principles: he was a firm patriot who fought against the Austro-Hungarian Empire, first as a member of the Slovenian and later the Yugoslav Sokol movement. He advocated the idea of an equal association of Southern Slavs, Slovenes, Croats and Serbs, but soon came to realise the hegemonic tendencies of the latter national group. As a doctor, he started out at Ljubljana hospital, then entered private practice. During the Balkan War of 1912, he worked in the hospital in Niš and wrote a memoir of his experiences there. He was also a Ljubljana city councillor and fought, among other things, on behalf of healthcare and the medical profession. His success in this regard led him to become the first president of the regional health council for Slovenia and Istria after the First World War, and he became a fierce advocate of the establishment of the first medical faculty in Slovenian territory. Unfortunately, his numerous political disappointments, despair at the death, from consumption, of his wife Evgenija, and his lack of children all contributed to his decision, in 1921, to take his own life. Nevertheless, his desire to support the emerging Slovenian intelligentsia, particularly students of medicine and those who had been born out of wedlock, led him to draft a carefully worded will that left a large property, which he had inherited from the Auer family, who had no descendants, to the Faculty of Medicine. Since 1925 almost 1,000 University of Ljubljana students have resided free of charge in one of the ‘Oražen dormitories’ in the city. His bequest matches that of Knafelj in Vienna.

Dr Ivan Oražen, benefactor of the Faculty of Medicine, University of Ljubljana

Shortly after the death of his wife in 1919, Dr Oražen drew up his first will; and while it was subsequently amended on many occasions with the help of lawyer Dr France Goršič, it remained the same in essence. The will contained the following words: ‘All my movable property and real estate I leave to the Faculty of Medicine, which is to use it to establish and maintain an Oražen student hall of residence, with precedence given to the free residence of illegitimate and poor medical students of Slovene, Serbian or Croatian extraction studying in Ljubljana.’ He requested that the buildings on Wolfova ulica and Dolenjska cesta be converted into a student dormitory to be called the ‘Oražnov dijaški dom’. It was intended for the children of unmarried parents and all those who were capable of study, but who were in straitened circumstances, from the Slovene or another Yugoslav nation. He also wrote that non-medical students could reside in the dormitory, with the exception of those studying theology, and he forbade the sale of the buildings. The university of the time called the Oražen Bequest a universal legacy, as it had never received such a large donation before (nor has it since). The will was contested by Oražen’s family, particularly his cousin Ela, who took legal action against the university; the challenge, however, was always bound to fail. Since 1925, generations of students have lived in the two buildings and enjoyed the generosity of this benefactor. They are proud to call themselves ‘Oražnovci’ – and the author of this article and of a book about Oražen is one herself. Dr Ivan Oražen’s noble act has so far helped around 1,000 students, mainly those studying medicine. His contribution is similar to Knafelj’s in Vienna, and both men deserve their prominence as benefactors of the Slovenian nation. Over the years, the faculty has held events to commemorate Dr Oražen, maintains his grave, has renovated and modernised both dormitories, and awarded Oražen Medals for top academic achievements. It has established a memorial room in the house of his birth in Kostanjevica and, in October 1999, organised a meeting of Oražnovci from all generations to commemorate the 130th anniversary of his birth and the 80th anniversary of the founding of the Faculty of Medicine; a biography was also published to mark the occasion. After the meeting and the presentation of the book, the Delo newspaper wrote that Oražen’s life story was so dramatic that it might be worthy of the full Hollywood treatment. On the occasion of the 140th anniversary of his birth in 2009, Oražnovci once again gathered in Kostanjevica, along the long-standing curator of the house Professor Stane Repše, to pay tribute to their benefactor.

Gathering of Oražnovci of all generations at Dr Oražen’s birth house in Kostanjevica na Krki, 2017

It might sound like something out of a fairytale, but Dr Oražen’s Bequest also contained valuable treasure: in this case, a collection of precious items that were first stored by the university in a bank vault and then removed and secretly buried in the university courtyard during the politically turbulent years leading up to the Second World War. Only three people knew the precise location of the treasure, but this did not stop everyone looking for it during the war – from the police and the National Bank to the Gestapo and the Yugoslav secret police. It was not excavated until around 1960, when the faculty dean was doctor and academician Janez Milčinski. They decided that the trove, made up of a quarter of a kilo of pure gold, precious stones, rubies, diamonds, garnets and other items, would be reworked into insignia for the office of the dean, a chain and a seal ring. Designer Bogica Pogačnik subtly wove brooches, earrings, rings and cufflinks into the chain and made a medallion from the heavy gold of a Swiss watch, which she enfolded in a Staff of Asclepius formed from a bracelet and wrapped around a staff to depict one of the symbols of medicine. The inscription on the medallion reads: ‘To the memory of the dead and for the encouragement of the living, from the legacy left to the University of Ljubljana’s Faculty of Medicine by Dr Ivan Oražen 1963". 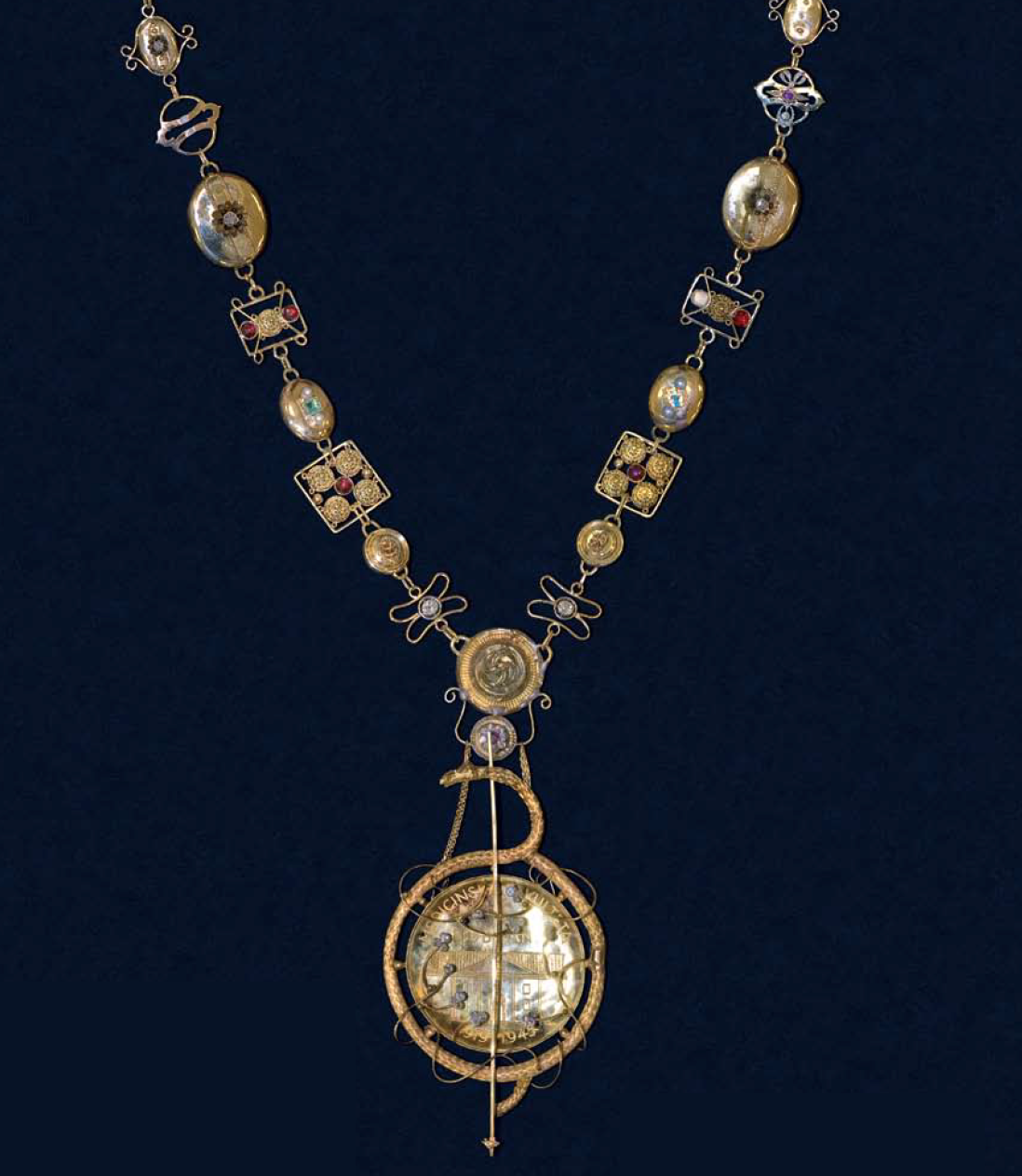 Dean’s chain, the insignia of the Faculty of Medicine, made from the gold found in the Oražen collection of treasure